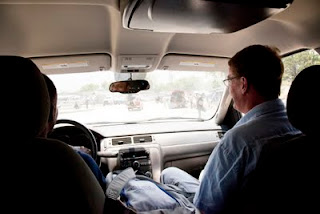 Bonjou Haiti.
Today was amazing.  I finally got to meet Shane Shaw face to face.  “He talked me into grabbing ‘my last Diet Coke’ while we were boarding the plane, then he arranged for the gentlemen sitting next to him to change seats and allow me to sit next to him on the last leg of our flight.
First impressions, he’s taller than I expected, and his friends in Fort Meyers make some outstanding buttered Butterfly Chicken.  Thanks to Shane, that was our lunch.
Later impressions, the guy is brilliant, he’s passionate about continuing his education, and he drives every bit as good as the Haitians I’ve been with.  You know, that ruthless, do-you-wanna-live-forever, playing chicken at 60 mph kind of driving, where either the Mack truck barreling down the road yields, or the guy next to you responds to your honking horn and brakes while your bumpers and mirrors pass within inches.  Either way, there is no second guessing, and no time to relent.
My kind of driving :)
He and his brother in Christ Dell drove me all the way to Cayes, and then Shane continued on with me clear to Ti Rivier, where he even helped me unload my bags and checked the batteries in my flashlight to make sure I had juice, should the electricity not come on.
Benson, one of the workers with Mission Haiti, was next on the scene, eager to say hello.  I realized instantly that I missed ‘Ti Bob’ and his smile, even though he’s shaved the Bob off and so therefore the nickname Little Beard no longer applies.  I walked up to the orphanage and paid my respects to my brother Patchouko and his family.  Jesula was beaming and beautiful as the setting sun with a little pooch in front where the baby is showing.  Patchouko was beaming, telling me he’s certain it’s a girl, and Joshua even gave me a happy grin.  I’m anxious to start in right away with my mission, but I didn’t want to seem too overpowering on my first night.
Besides, the sun was going down and I didn’t even have a single thing unpacked.
I said some quick bonswas to my new neighbors down the road who seem to be looking at me like I’m the new crazy American who went off the deep end, smiled at the bread girl, who I already know is a future friend (her bread looks like art the way she braids it), and even got to see that gorgeous girl Judeline walking down the path like she was the Angel of Ti Rivier.  I think she was surprised that I remembered her name.  How could I forget the girl who taught me what worship really looks like?  Abby’s friend Nephtelie, or Katsie as she’s called around here, noticed me walking down the road and walked up to me.  I told her Abby would be coming to live here soon, and she almost started sprinting down the path.  I had to call out to her and explain that in my best broken Creole that she wasn’t here quite yet.  She’s now brimming with anticipation. :)
Most things are unpacked, although certainly not to Kari-standards, and I know if she were hear she’d call my efforts pathetically lacking and in need of a woman’s touch, but I’m tired.
Power came on and I spent the last half hour hand pumping some fresh water with my little personal filter.  It went directly into the freezer since I’m figuring I’m gonna cool it down as much as possible before the power flickers out.  I’m dripping and so very ready for my body to start acclimating.  I got prayed over by Andi Gedna on my way down, then a pastor Micah who was next to me on the flight, and finally Shane as we said our goodbyes until the next time.  I think he’s a little concerned about me, and my particular methods for coming to Haiti.  But I’ve realized a long time ago that I do everything against the grain, and not on purpose.  It’s just the way I’m made, and God had a purpose in mind when he knit me together.   He’ll provide.
Posted by Daniel C. Elliott at 5:40 AM