When we got back from the mountain my friend Edain came to tell me about a man he knows that wanted to accept Jesus. The man had noticed a change in the countenance of Edain, and only knew he wanted some of that.
We came to his house and found him out in his garden working, and then found some shade to sit and talk.

We walked through Scripture about how we've all sinned, and then we talked about what sin even means, the payment for sin, the wages, death, and how we can arrive at this place called Hell where there is no more of that beautiful presence of the Living God. No birds singing. No beautiful sunrise. A place where God is not. A place void of any encouragement or love at all. A place where forgiveness is never spoken, where the redemption of mercy and grace never arrive in the heart of the broken. Then we came to Jesus and why He died, how He made a road for us, a way for us to be fully, totally, absolutely immersed in the presence and the Love of God. He payed for our sins on the cross, and now the choice is ours. Do you accept Him or reject Him? He will give to you your heart's desire. Eternity in His presence, or eternity away from His presence.

I picked up a tiny pebble and told him that the more I follow Jesus the more I realize I understand him only maybe as much as this pebble, but that's ok with me. It's beautiful to me actually, because He wouldn't be much of a God if I could comprehend everything I've learned about Him. I've sinned greatly before I was a Christian and I've sinned greatly since I've been a Christian, and God forgives, and keeps on loving. He doesn't give up.

I told him that he would fall, and people would be watching him, waiting for him to fall, ready to point their fingers. Choosing Him isn't for a profit or gain, for a wealth you will find in this world. Choosing Him is a guarantee that you may find persecution, hardships, trials, and yet a promise that if you follow, He will be with you, always, to the very end of the age. His promise is for something they can never take away, eternity with God.

What do you choose today?

This middle-aged farmer rose, his eyes beaming and a great smile on his face. "I choose to follow Jesus." He cried out.

"What do I need to do? Should I get down on my knees?"

It had already arrive in this man's heart. Salvation so sweet and pure. A gift that can't be earned or bought, only received, amen? Please pray for Gerard today. He will begin coming to Pastor Pompee's church and on Sunday he'd like to be baptized. He is fully aware of his responsibility to share with his wife and children and grandchildren about this Jesus who is transforming his life, and even though he can't read the Word of God, he is eager to come and hear more about his Savior.
Posted by Daniel C. Elliott at 7:17 AM No comments:

We were able to make a camping trip to Macaya, the second highest peak in Haiti. The boy and I got up early every morning before sunrise, and listened to a bird the Haitians call the Musician. In English we call them the Rufous Throated Solitaire, but the Haitian word is much more fitting. If anyone remembers the Mockingjay from the Hunger Games books, this bird would seem to be the inspiration. When you hear dozens of them singing, echoing from the mountaintops and the valleys, they truly are a symphony.

Since we rose before the dawn, we were already listening when the first birds began to sing. It was fascinating to me. One bird began the music as he sang out his note, and another called back.  Then the others began to join in.  For the first minute or so they all sang the same note, as if they were warming up, tuning their instruments. Then a brave bird from the other mountain called out with a different note, and so started the song. Higher pitches met with lower ones until they all blended into one perfect melody. It sounded as if there were wind chimes hanging from every peak.

I made a recording. See if you can pick them out among the other birds, the crickets, and the roosters.

Posted by Daniel C. Elliott at 7:54 AM No comments:

Blessings from the Mountain

We went on a camping trip to Macaya, the second highest peak in Haiti. Through a miscalculation we knew we were going to run out of food, and this mountain range is one of the most secluded regions in the entire country. The village we had started from was a hard, full days hike. Out of nowhere came this woman, her name is Chemen, which means Path. She had a full gallon of fresh cows milk and food. She said she could see we were hungry and she gave us the food. We told her our predicament and later that night she sent yams and plantain up the mountain from all the way down below. We got up in the morning to boil them on the fire, and just as we were getting ready to eat, she came hiking up with her own pots. She had even planned to come and cook for us. Some of us were left wondering if she was an angel. It seemed to us all like the stuff of the Bible, with an Old Testament, Elijah kind of feel, and it tasted like manna from heaven to fill our bellies with boiled yams on a cold morning. What a beautiful story of provision and hospitality that I will never forget. 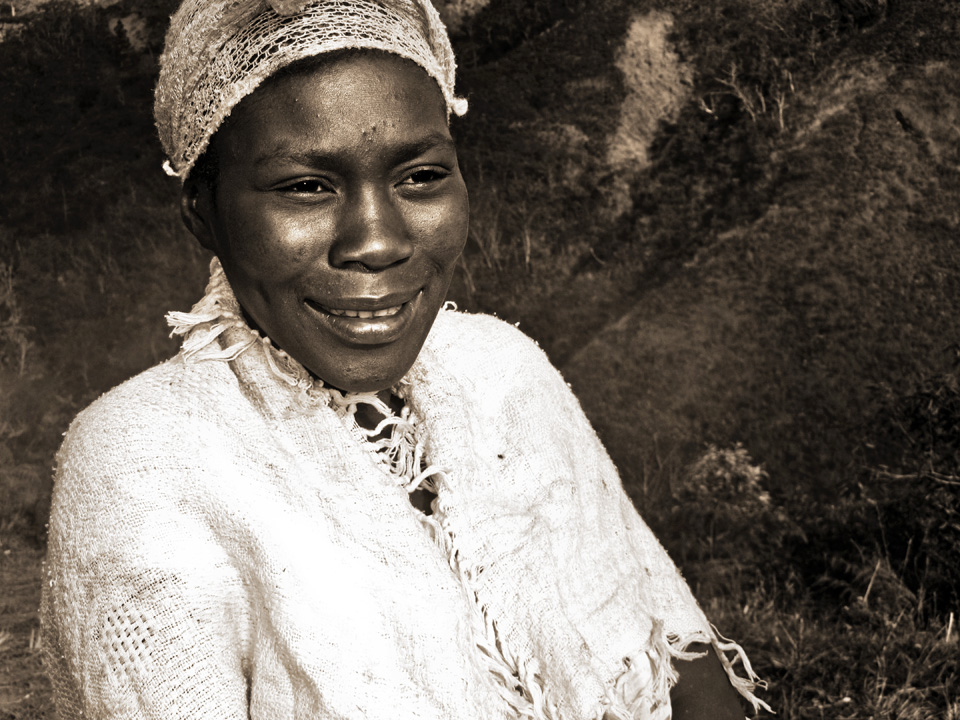 Posted by Daniel C. Elliott at 6:48 AM No comments:

Last year I began writing a book on Haiti, and then some very gifted friends got ahold of it and crafted this wonderfully immersive story using pictures, words and sounds. They've honed raw feelings from a work-in-progress into an online experience that puts the glory and the focus on God.
See what you think and please give us your feedback?
Blessings,
Dan Elliott

Posted by Daniel C. Elliott at 6:15 PM No comments:

I got the call from a veterinary friend of mine that there were two sick horses in a village not far from me, and he asked if we'd like to come along. The owner was also a missionary. I knew Abby would be excited, so her and I jumped on the motorcycle and zipped down the road to where our friend was waiting.
After a good deal of puddle-dodging down a back road we finally came upon the missionary and his horses. He had brought them out onto the road for the doctor to get a good look at them, and the commotion had stirred up quite a crowd of locals. I noticed very quickly that there were two types of people watching the doctor make his diagnosis, there were those who wanted to learn and those who didn't.

My daughter, along with a few of the villagers, watched with laser-vision every move the vet made. He checked the gums, the eyelids, the muscle tension, all sorts of things, and explained to us exactly what he was doing. Abby absorbed every word, asking questions and taking a mental log of every detail, in case she ever needed to make the same check on her own horse. She got to listen with a stethoscope for the first time, to hear the heartbeat of this grand animal, to hear her labored breathing. A few of the men next to us also paid close attention, and they were very grateful for the opportunity. Then there were the rest.

They sat at the side of the road, mocking. Making fun of every move, laughing at the vet when the horse tried to kick him. They made as many jokes as they could, speaking loudly to draw attention to themselves. Some of the girls laughed at the disrespect of the men. Some of the children were also watching as they pretended the white doctor knew nothing.

Here was this man who had paid a great deal of money for his education, who had years and years of experience in the field, and he was in their village, looking at two horses free of charge, out on the street in full public view. The opportunity to learn couldn't have been more obvious, and yet they learned nothing at all. Instead they asked no questions and only made jokes, trying to discourage the vet.
"These two horses are like my babies." The missionary said. "I love them so much. I try to give them everything, I train them. They are my companions." The vet gave his recommendations for medicine and rest, and we thanked him for letting us come to see.
Then the next morning I got a message from the vet.
"Someone killed one of the missionary's horses in the night." He said. "Hit her so hard in the head that she died."Abby was devastated, and we prayed for the missionary since we know he is struggling with forgiveness and grief, especially because during the exam we found that same horse to be pregnant. Sometimes it seems insurmountable in Haiti to understand that we are living illustrations, in spite of persecution. God's examples are all around us, and how we act or react is often the measure not just of the man, but of the Christian. How many times have I failed at just that point?

During devotions as I was reading the Bible in Kreyol, Oberline began to laugh at my dialect, making fun of my words. She couldn't help herself, and it was so easy to laugh at me anyway. Ironically, she completely missed the verse I was reading, James 1:25, which translated in the Kreyol reflects this, "If you're not a person who lets the Word of God go in one ear and out the other, if you do what the Law asks, you'll find blessings."

We can be so distracted by one another that we miss the workmanship of God. We can take the easy road, hardening hearts with our tongue, discouraging, mocking, and hurting in the name of being comfortable with ourselves, but aren't we missing something?  Yes! We are missing the blessing.It's only the condition of our hearts that keeps us in the darkness. If we will just soften and open even a little bit, there's a beautiful light. It's warm, and there's enough to go around. Why do we choose to bicker in the cold? It all comes down to the name of Jesus, and whether or not the knee will bend. The truth is they will bend. Every one. The only question is whether it's here or there.