Like I said before, the market was more than I bargained for, but after a 3 hour ordeal to get there an back, there wasn’t anything that was going to stop me from going through with my cooking bargain.
I stopped off at Judeline’s to tell her we were ready, and she disappeared in a flash.
I didn’t know where she’d ran off to, but I soon found out she’d gone to take a shower.   She wanted to be fully scrubbed up before she started.  I thought that was very courteous.
When she did come over, Tililene and Tikilene were both there, and so the house was full.  Judeline was carrying a rolling pin and a cutting board, which she said belonged to her mother.   She told me that it was her mother that taught her how to make Patte, and that she was a very good cook.  I told her that was why I asked her to teach me, because her cooking was exceptional, and she should thank her momma.
So here’s the nuts and bolts: 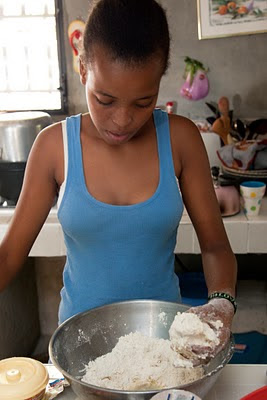 Get two bowls.  Shred salami, cabbage, onion and carrots, but only have the salami in one of the bowls with the ingredients.  This will be the dope, or the meat of the Patte.  The other will be a side dish of sorts, that you eat along with the Patte, like a cole-slaw. 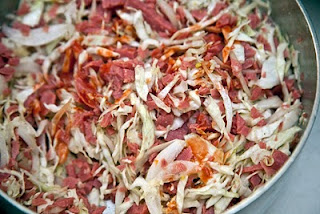 Now combine Maggi, which is like a chicken bouillon, hot sauce, water and salt, and mix to taste.  This you pour over both bowls.   Squirt some fresh citron (or lime) over the both bowls.  This preserves the vegetables and gives flavor.
now grab the flaurine (flour) and mix it with butter.  Add in some cheese, which is a kind of fondu, and then a couple capfuls of oil.  Then add enough water and knead the mix until you have a good dough.  Put some oil on the cutting board. 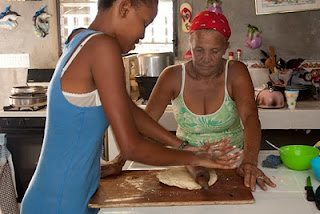 Roll or push the dough out flat, then fold it all up and throw a towel over it to let it set up and rise a bit.
During this time, start you charcoal.  Use some kerosene or oil, even a little dried coconut husk to get the charcoal going good.  It’s not like American charcoal.  It doesn’t burn easily.   Let the charcoal work through and go back to the Patte.  Roll up the dough into a long cylinder, then start cutting it like you would for biscuits. 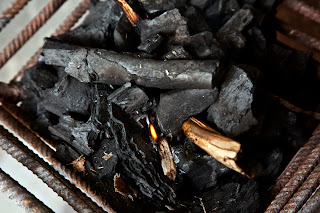 Pat out the dough in a circle, scoop in the mix, and form into a half circle.  Press together the ends and use a fork to interlock them for the oil. 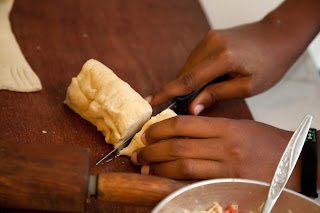 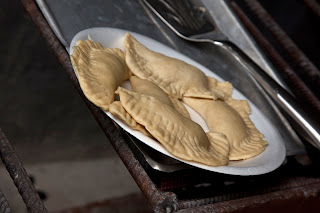 Go put the oil on the coals once they are good and hot.
The temperature will be enough to slow cook the Patte.  You don’t want it to flash cook, because the outside will get too dark and the inside will still be soft and gooey. 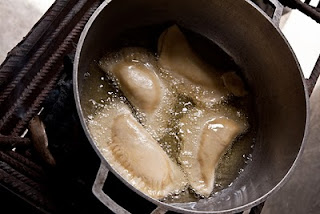 You want flakiness.  Fully cooked, fully golden brown, and just under crispy.  Knowing when to flip it and when to pull it out is a crucial step. 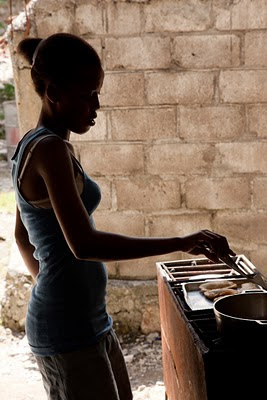 Patchouko and Robenson very conveniently just happened to stop by as Judeline was pulling off the Patte.   I told Patchouko he had good timing, and he just gave me a sly smile.  He knew exactly when to show up. :)
We made enough to feed Judeline, Tililene, Tikilene, Patchouko, Robenson, myself, and even have leftover for her to take home to her family.
Posted by Daniel C. Elliott at 5:34 PM