A few days ago, it was a hot day, so I had the back door and the front door wide open, to create a sort of wind tunnel in the house and get some air movement.   Madame Tililene had brought over lunch and I was having a quiet meal, my thoughts drifting here and there, bouncing all over from subject to subject as one does when alone at a table.   The only conversation is the one in your head, so you make the most of your imagination.
Suddenly I got that feeling like something was watching me, and I looked up. 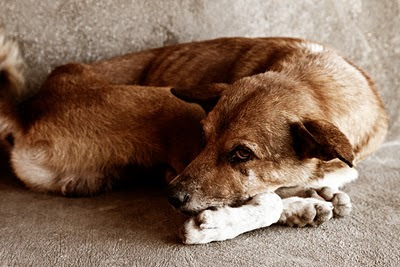 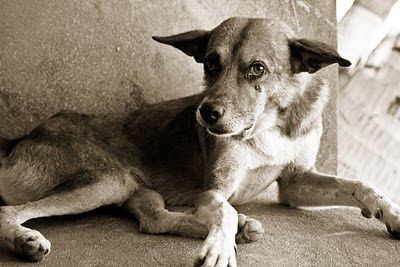 There sitting in my doorway, exactly on the threshold of where the door would close, was a huge, hungry, mangy mutt with his ears back.  He was just staring at me, still as a statue.
If you’ve ever seen the native dog in Haiti, they aren’t exactly in the cute and cuddly category.  More like the tough, sinewy, wolf-dog, bite-your-hand-off class.   And they are used to humans being extremely harsh towards them here.  It’s not at all uncommon to see a dog kicked, and kicked hard, right in the ribs.  It’s even less uncommon to see someone pick up a large rock and chuck it as hard as they can at a dog.  They are simply not appreciated here at all, and certainly not considered man’s best friend.  I’m sure in much the same way, the feeling is mutual after generations of man and beast not getting along.
So there we sat staring at each other.   His ears were laying back, but he wasn’t growling.  He wasn’t coming in, yet, but he had no intention of leaving either.   For a good 10 seconds we just measured one another.   He had fleas.  He had some kind of mange, and he’d seen his share of rocks, with a recent open wound on his snout.
Finally I decided to be bold.  I grabbed the chicken bone on my plate, scooted out of my chair loudly and walked straight at him, surprised that he didn’t even flinch.   I whistled at him like any dog in America, and said,
“C’mon boy, follow me.”  Then I walked straight past him.   If he was going to bite me it would have been right then.  I walked out of the house and around to the back yard, and when I looked back he was right there at my heels.  I opened the gate and gently laid the chicken bone outside on the back porch, and he walked through.   As he picked it up, he looked at me.  I smiled and told him we were gonna be alright.  I saw his tail wag just ever so slightly, and off he went with his prize, though not too far because the other dogs might see and fight him for it.
Today after church I walked the road home, and just as I was coming up to my gate, out of nowhere arrived the mangy mutt.   He walked straight towards me, fully confident.
I said to him,
“Hey pup, whatchya doing?”  Just like that he turned and wagged his tail and cuddled up to my leg.  I gave him a quick pat, and we silently agreed to have him meet me out at the back gate after lunch. :)     I think I’m gonna give him my own nickname.  Something wild because he looks every bit like a junkyard dog.   Maybe I’ll call him Mange, or Scruff, or maybe.....yeah... I think I’ll call him Bruiser.


By the way, any of you dog-lovers out there want to send some flea collars, these poor saps would really appreciate it.  They are crawling with fleas and constantly scratching themselves.
Posted by Daniel C. Elliott at 12:51 PM