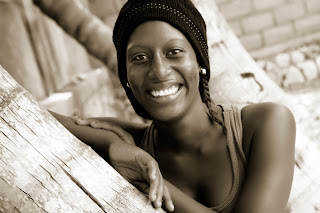 She told me she would like a picture for Facebook, and she'd heard I really like to take pictures.  Really?  Whatever gave you that idea?
Could it be the fact that I'll carry an extra 50 lbs on my back just for one image?

Darlene told me she doesn't swim because it makes her more black, and in Haiti many women actually buy cream to lighten their skin color or change it.  She said some men would leave their women if they got too dark.   Wow.   I told her that kind of love is not the kind Christ intended, if a man would leave over something so superficial, and if a guy ever did that to her, his love was cheap.
"What do you mean by 'Cheap'?
I picked up a stone from the thousands before me on the ground.  Imagine this stone were a diamond.  Would you cherish it?
YES!
Would it be worth very much too you?
YES!
Would you take care of it?
YES!
Right, it's precious.   The kind of love God intended.  Now, what if it's just a stone,  a rock.  Would you  pay me for it?
No.
Is it worth anything to you?
No.
That's cheap.   That's the kind of love a man would have for you if he left you because of your skin.

She is a beautiful woman.  Her faith is refreshing.  Her laugh is contagious, and she is a light. 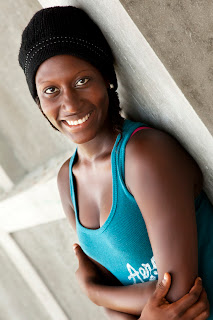