110930: The Back, Back, Back Room.
I rode my scooter into Cayes behind Patchouko, so we could get it greased and oiled.  On the way there we stopped at the Vietnamese mobile internet company, Natcom.
Do you remember the back room I talked about bum-rushing a week or so ago with Adrien?
I get there with Patchouko, he says just a few words to the beautiful, professional Haitian woman behind the desk, and suddenly it’s like we have VIP privileges.
Before I know it, we’re being ‘shown’ through the back door.
“Wow.”  I said.  “The back door.”   People were being helped by technicians, left and right.
“I knew it!” I said.
But oh know, we weren't finished.
“Right this way, gentlemen.”  We were shown through another door which led down a hallway, to the final, final back room.
The door was opened for us slowly, and what came next was classic.  A small, cigarette smoke-filled room, packed tight with privileged people... and about 6 Vietnamese techs.  They all looked up as we entered, and then they gave us a nod.
We were in.
How in the world!?
I still don’t know how he did it.
When I asked Patchouko, he just laughed.
“I am VIP, you know.  I’m like the mayor.”
There was a room filled with jump drives and people who knew how to make them work, yet we were cast in this 1940’s Private Eye movie.  Everyone was sweating, everyone was smoking, and there was a little metal fan in the corner. I snapped a couple of stealth images from my phone, because I knew nobody would believe me.  Forgive the quality.  Stealth, cell phone, c'mon, what more do you want? 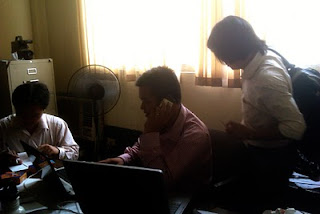 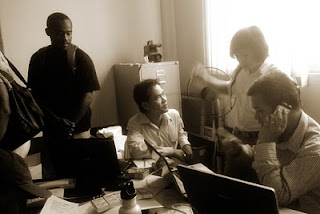 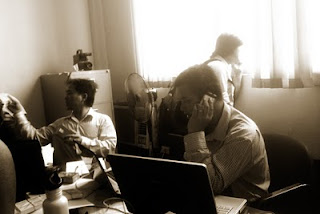 Security was right there also.   Big guys, bouncers, guys that could put the hurt on.  My plan to bum-rush the door with Adrien would have ended very badly for me I think.
They still couldn’t fix my phone.  The battery died just as it was handed to The Man, the Tech, the GUY who knew how to make any phone work...  So I struck out.

But Patchouko walked out smiling, now a Haitian man in Ti Riviere, Haiti, with Internet.  He is only the 2nd Haitian to have the Internet in his village.
He was very, very happy.
Posted by Daniel C. Elliott at 5:38 PM