The Water in Ti Rivier

I talked with Adrien, and he agreed to show me the source of the water for Ti Rivier.
I also spoke with a man named Rober, and he gave me a little more background.
Here's what I've been able to gather.  Over 20 years ago, an organization came in and tapped a natural spring near the river.  They built a holding tank out of concrete, and piped the water, along the river, to the main road in Ti Rivier.
In 2008, another organization came in to to "patch" the well, as it had deteriorated substantially.  The pipe, however, is the original.
Rober says when people start getting sick, his job is to fix the water, which means he opens up the top hatch and pours Clorox in.   He says it only temporarily fixes the problem, and that it's getting much worse.
Cholera seems to be on the rise again. It's up the mountain, it's down the road in the next village over.
So we decided to follow the pipe.
It all begins here at the 20 year old containment source. 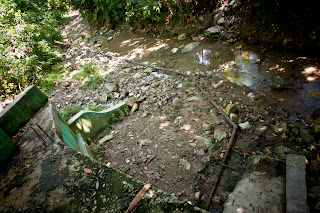 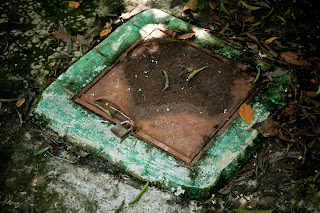 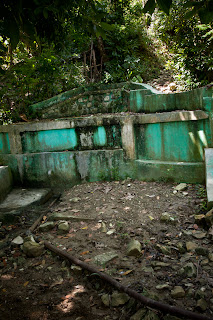 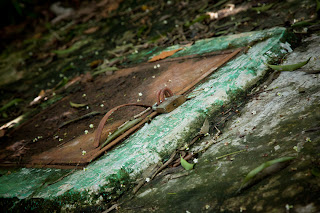 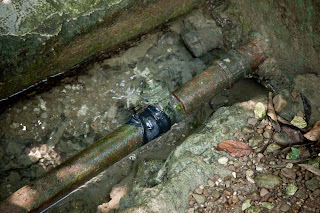 The first pipe coming out of the containment is broken.  Water is leaking out, and there's a patch wrapped around it.  The pipe follows the course of the river, just laying on the rocks.  There are alot of leaks.  Keep in mind this is the dry season, so the pipe is exposed.  Usually this pipe is underwater, where the contaminated river water can seep in.  Rober says this often happens. 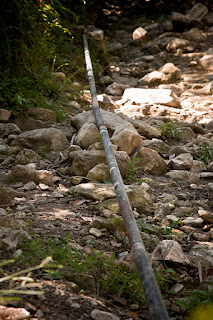 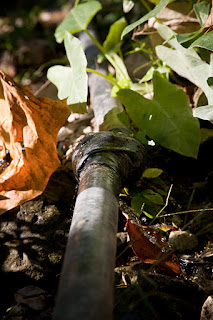 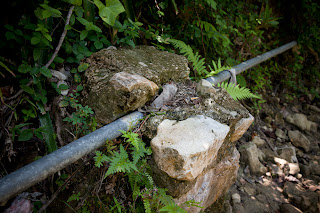 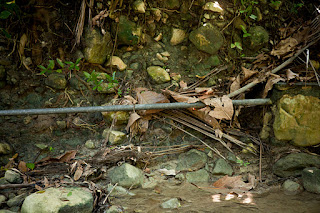 There is an outlet, a substation of sorts, that the people use about half way down.  Everyone believes this water is good water compared to other water sources.  Adrien says he doesn't trust it. He said he got sick when he drank it, and had a very bad experience.  He says there's 'alot of bugs'  in that water. 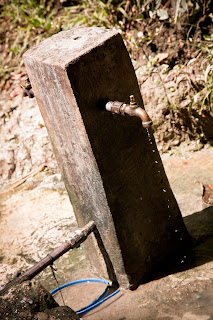 Along the way back to the village, you see the many uses of the river water. From latrine, to laundry, to animals, to bathing. 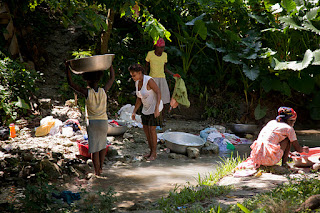 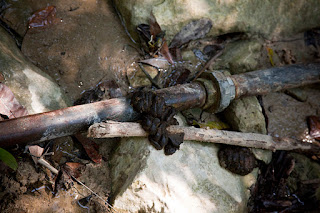 And finally we pop out at the main road. It's afternoon, so all of the villagers are coming to fill up their water jugs for the day.  Many drink the water right out of the pipe. Just down the spillway, the girls bathe and wash.  Later in the afternoon, everyone takes turn showering here.  I didn't figure the locals would appreciate me very much snapping shots at that time of day.  Incidentally, the water in my house comes from this pipe.   The water I drink comes from an artesian well about 6 miles or so up the road. 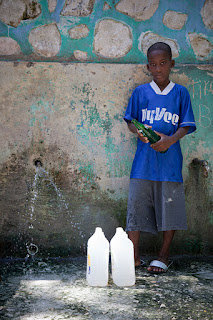 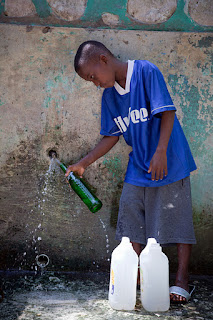 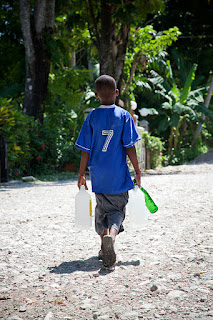 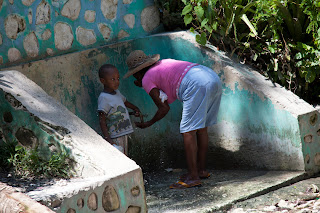 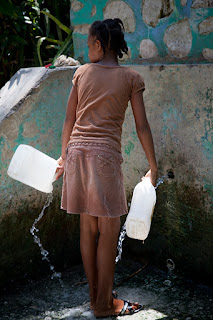 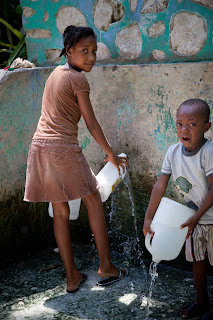 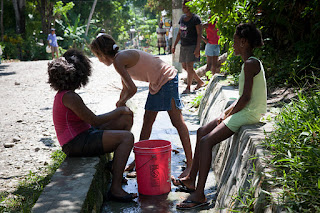 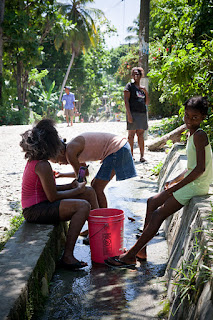 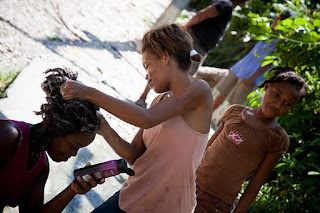 So, the next steps would be to have the water tested, although I think it would be a waste of time.  Pretty sure with the leaks, knowing it's a 20 year old pipe, and it's under the river water most of the time, it's going to be bad.
Here's a message from the man who could help dig a new well.
"Yes, I worked with the IRD well drillers based out of Cayes for about 11 years. The head driller is Enoc, his phone is 509-3723-0824.  The cost is 75,000 gds. or around $1900 US.  This includes a hand pump (that my brother still makes) and the community must have access to the well.  No private wells.  The road would have to be such that they could drive the big rig there.   I have no idea what their schedule is.
Hope this helps,
God Bless
Till the net's full
Jan Gutwein
Loving Shepherd Ministries
Agape FL Cayes 18778
100 Airport Ave.
Venice FL 34285
1-312-267-0606 VOIP (rings in Haiti)
011-509-3625-4088 Haitian Cell"
Adrien says the hand-pumps don't last and always wind up getting broken.  He says the electric pump is better, and to have a cistern that holds the water.  That means the cost would go up.   I guess I can't get any more specific than that.
Posted by Daniel C. Elliott at 1:16 PM