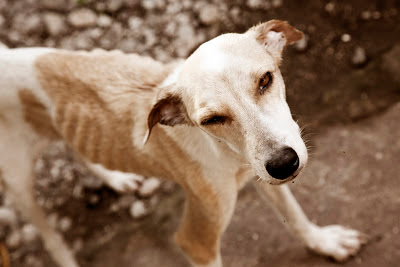 For the last 3 weeks when I drive to the old village, I've noticed my old friend is not there to greet me.
No happy wag, no crossing the party lines to just love on the human unconditionally, no hot pursuit of the car as I pull away, chasing me for a mile or two down the road.
Two nights ago when I came to visit someone finally said,
"Hey, there's your dog Dan."
When I saw her my heart broke.  I could feel my spirit so stirred.
She stood in the road, looking like a breeze might knock her down, nothing but skin and bones.
She was very sick and nearly dead, with one eye badly damaged, and yet still, when she saw me, she gave me a smile and wagged her tail, doing her best to walk to me.
I met her half way in the middle of the road, and already some of the villagers were talking.
I bought her a piece of bread from the lady on the corner, and even more people took issue when I broke it up and gave it to her.  She was too weak to eat.
Some of the people were laughing, some whispering.  One woman told me to just leave the dog, get away from her.
I had no room on the moto, so I gave her a kiss and told her I'd be back for her in the morning with the car.
The Haitians thought I was just kidding.
The next morning I came with my son.
It was raining, and just before we got out of the car to go look for her, Logan said,
"Well, we know everyone is going to make fun of us for this. This will be embarrassing."
"Yep." I said. "And I don't care what it looks like. It's the right thing to do."
I found her curled up in a ball in an outhouse. She stood immediately and followed me to the car.
A Haitian on the street asked me for a ride to the market.
"No problem, but just be aware I'm bringing that dog."
"Uhhhhh.....O...K?" They said.
"Yep.  It is ok. There's room."
I opened the back of the car, but she was too weak, so I picked her up and put her inside.
I saw a group of people mocking and laughing.
I walked over to them and all the giggles stopped.
"I love that dog.  She's a good dog.  I have a missionary friend who works with animals.  He's agreed to look at her for me.  This is why I'm taking her. Why wouldn't I?"
"No problem." they said.
We gave 5 haitians a ride while Logan held her.  She was foaming and coughing.

We finally drove into the clinic of Dr. Paul Rudenberg, and he was waiting outside to see her.
Thank you Lord, that you bless us so much to even have this man here, to look at this sick dog.
Paul prescribed her medicine and diagnosed her condition, part starvation/part kennel cough.
She was covered in ticks, atleast 40 of them.
He gave me medicine and shampoo.  She might yet make a turn for the better.
As usual, she followed me wherever I went.
He wouldn't allow me to pay him for his services.
"This is my ministry." He said.
"I know I'm the talk of the whole village and they all think I'm a crazy Blanc for taking her, but I don't care." I said.
"As opposed to what?" He shot back. "Letting her just rot away in the street?"
I felt the encouragement right away.  We understood each other perfectly.
"Yeah, they probably think you're weird.  Good!  They see compassion, that you care.  So what? Is that so bad?  They will want to know why you have that compassion.  Why do you care?And there you go. You can tell them."  He smiled.
We talked of God's last words on Nineveh, and of Noah's Ark and who had a free boarding pass.
"It's biblical." Paul said.
Yes it is.  It's my God.
God cares.
God has compassion.
Shouldn't I?
Ezekiel says when He saw me in the street, laying there bleeding, He didn't just pass on by. Instead, He said to me, "Live!"
He saw someone helpless who wouldn't make it on their own.
I think He'd approve if I extend the courtesy to a simple dog who loved unconditionally. 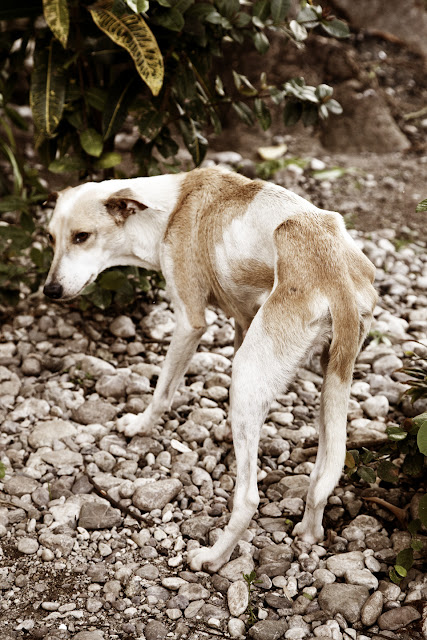