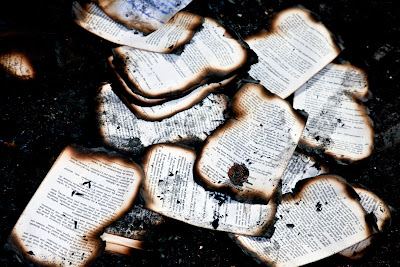 A Haitian friend of mine named Eddy runs an orphanage and a school just a few miles from my house.  He is a good man, and in fact when I first got to know him I had to invite my other good friend Patchouko and his family to come for supper so they could be introduced.  It was unbelievable to me how similar these two men really were.

Today was a perfect example, as I watched this man shine.

Yesterday the kids needed more airflow inside the rooms, so Eddy hired a welder to make the windows larger.  Each house is built from shipping containers, while the roofs are all traditional thatch.
As the welder began to torch the holes he noticed smoke coming from the thatch, so he stopped and threw on a bucket of water, but then continued back to work.
After a few minutes someone came running down the road waving their arms.   A fire had already started on one of the roofs where he'd just finished.   The thatch ignited like a match and in just a moment there was an intense blaze.
Immediately they got the children out of the orphanage, and Eddy tried to call for a fire truck.
He first called the police in the local town, but their fire truck was broken and they could do nothing.   Then he called the UN, and while they said they could help, their truck was an hour away.
As a last resort he called the airport, who said they could help but they needed the permission from the capital first. 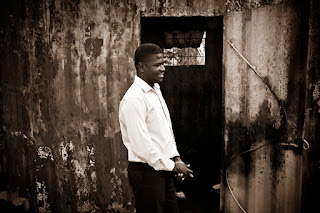 In frustration Eddy hung up the phone as people began pouring into the orphanage.  While some of the people came to help, others came to rob and steal.   In the excitement of carrying buckets of water, many stole money, clothes, even mattresses.  One of the locals even thought there was a party and a big give-away, with the way people were running from the orphanage with hands full of merchandise.
The fire grew so hot that the people could only get to about 20 feet from the flames to throw on the buckets.  It was just too much to bear.
Solar panels exploded.  They lost the electricity, they lost the ability to pump water from the well, and there was a great deal of destruction, with the added slap of being robbed while in your most vulnerable moment, by the very people you've come to serve.   Eddy built this orphanage, for them.   He built the clinic and staffed it with 2 nurses and a doctor, for them.   He started an entire school and food program, for them.
So how is it that this morning this man can still smile?   How is it he tells me he sees the blessing of God?
"If the fire had come in the night, as fast as it spread, I don't think anyone would have survived."   All of the children would have been sleeping and the flames would have consumed them.   I hear the echo of my friend Patchouko, talking about how much he sees God loves him in his terrible moto accident.
"We will rebuild with tin roofs and we won't use thatch."  Eddy smiles as he goes to hug another sick little girl, showering her with kisses. "It's life.  We are still alive! It's God giving us a second chance." 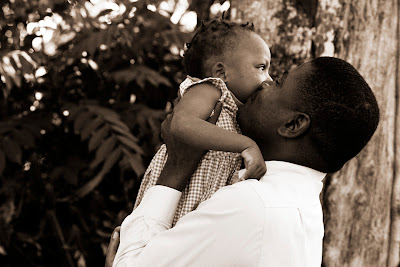 This is Bernia, one of three children from my village that were able to see a doctor at Eddy's clinic just this morning. This girl isn't even 2 and she has boils all over her body.  Today she has antibiotics and medicine. If anyone would like to donate towards restoring what was lost, you can reach eddy at the email address below:
edcosta15@yahoo.fr 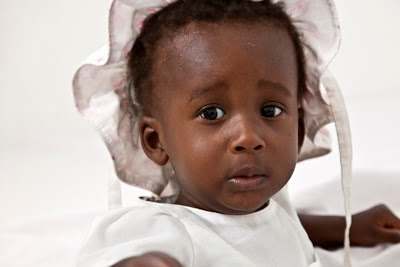