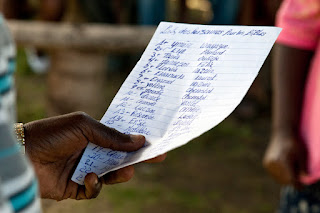 The pastor's list came in, filled with names of the people in his flock, and plans were made to visit a new church called Picaban.  It would be the farthest distribution we've done to the south, but two pastors and two Haitian neighbor kids volunteered to come along, so we made a day of it.
At the last minute plans changed and we lost our translator, but we knew enough Kreyol to get by.
We figured it'd be like driving a stick-shift for the first time, you might pop the clutch and kill it a few times but you'll get there in the end, and besides, we had two Haitian pastors.  How equipped do you really need to be, Christian?
It was a little further of a hike than we planned, but well worth it.  The time to walk has a way of solidifying young and old, Haitian and American, Christian brothers and sisters all... 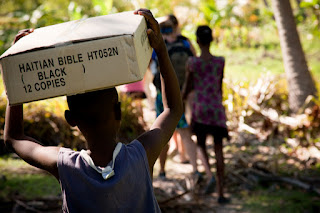 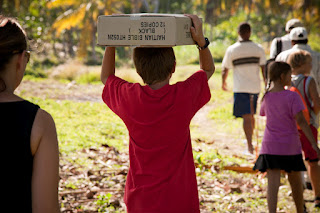 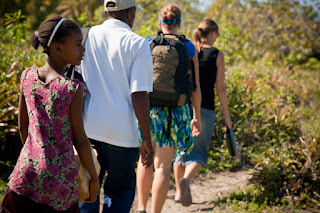 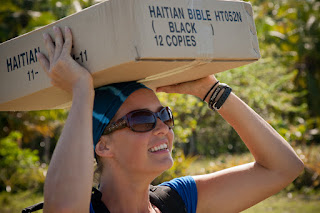 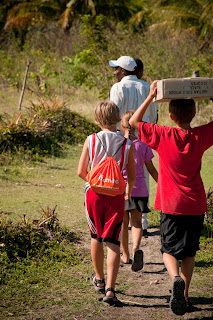 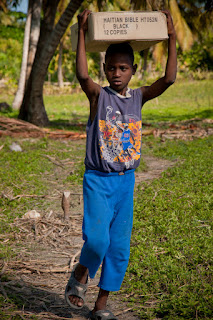 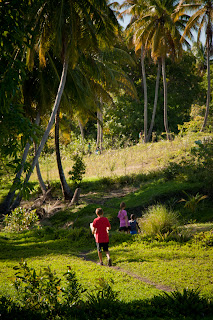 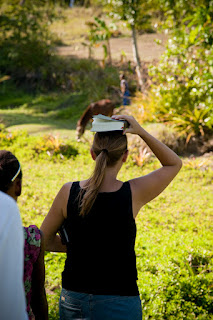 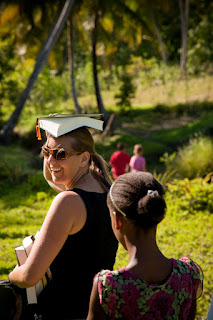 When we came to the river, the same river I fell into last fall with my moto, Heather showed us all the art of flying with grace as she jumped like a ballerina over the narrow spot.   Then the boys showed us their ninja jumping techniques, something resembling Karate Kid and the Flying-Swan, until they came crashing to the earth.  I decided to call it the Shot-Duck after that.
The girls crossed as ladies, one even on the pastor's back. 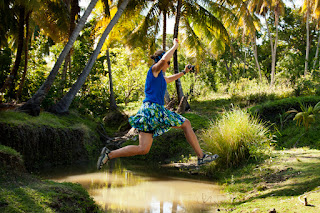 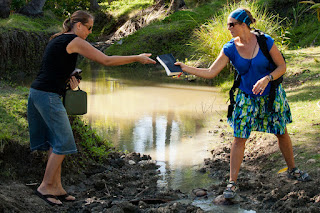 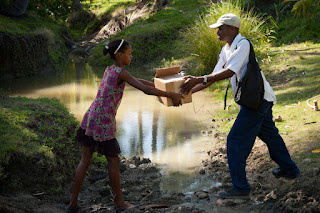 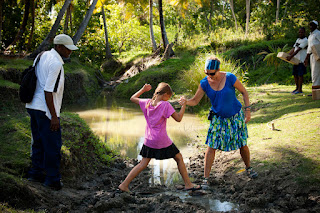 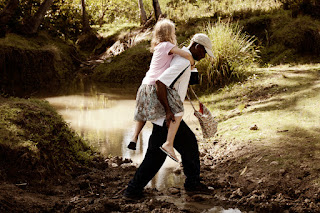 When we got there, the church was so new we found only pillars and a tin roof, with some ribbon and leaves tied around the posts for decoration.  I decided immediately that all churches should be built to these specs, exactly as this one, from now on.
To sit down on the benches carved out of palm trees and feel the breeze on your face, to smell the apple tree coming into bloom, to watch the cow grazing in the yard and feel the sun beaming down as the farmer in the next field over tills the ground with a pick axe...what a humbling reminder not to think too highly of ourselves, to remember that we are created beings.  What better incentive to GO and share His word.  To plant these seeds in such fertile ground is a privilege. 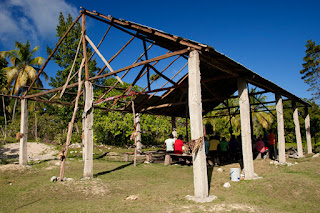 The kids helped to haul the Bibles in, and we gave the Gospel.  Both pastors gave a short message, and we began the distribution. We sang some songs together and talked about returning, hopefully before the rains come, because we might not be able to cross the rivers. 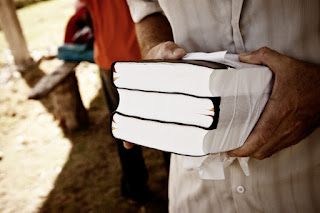 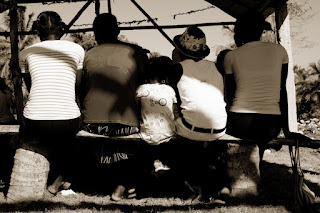 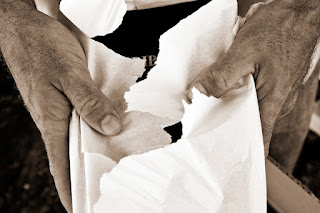 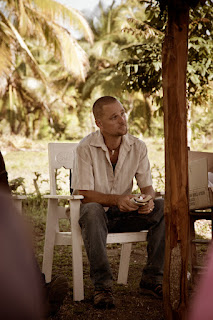 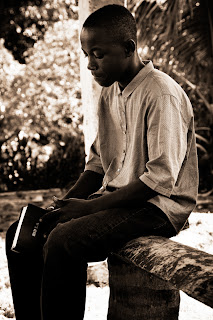 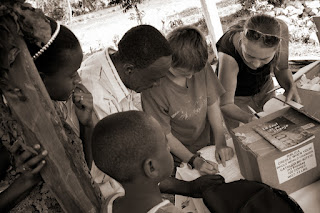 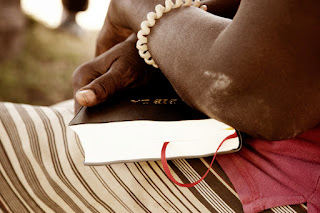 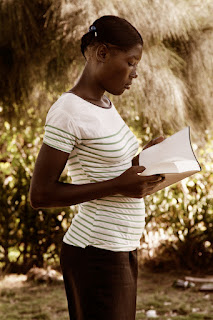 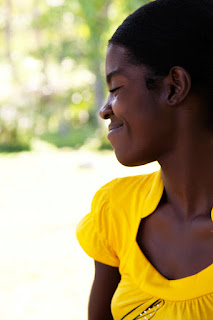 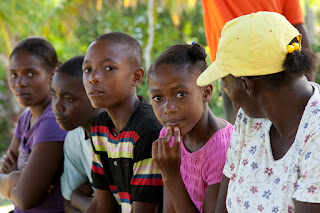 Sometimes people, even missionaries, tell me they don't understand why we give Bibles, when there's so much need.  They think that aid has to be tangible, something you can put your finger on. But then that kind of thinking floats across the water from America like the garbage from one of the many cruise ships that pass by without stopping. It takes the form of Barbie dolls and Skittles, garbage bags filled with old clothes and worn-out shoes of different odd-end sizes, and food long past its expiration date because at the last church food drive we reached into the back of the cupboard and found those beans we didn't mean to buy 5 years ago.
There are countless half-started, half-hearted, abandoned humanitarian aid projects riddling the countryside while we mount our civilized 'we-came we-saw, we got-the-t-shirt' goodwill. But then what is left in the wake is really more barbaric than anything.  We leave a people with a hand-out, dependent, and still as troubled and jobless.  A Haitian boy not even 5-years old will give me a knee-jerk response as I pass him on the road,
"Blanc (white)! Give me money!"
What are we really doing?
I see something different.  I see hope, inspiration, love, and peace.
I see a young generation that is more equipped every day through literacy,
and a Haiti that will be forever changed as a result.
I see God working in there.
I see the spark that will start the fire, in every young Haitian's eyes.
I don't have the ability to give jobs.  I don't have the funds to buy everyone a cow.  I'm not a doctor.
I don't have the resources to start another school.  I'm not a scientist who can discover clean, fresh water.
I'm a photographer.  I'm a writer.  I love music.
More than anything, I have God's word.  It's filled with a Love so great that He gave His only son.
I know that if I love anyone in this world, I have to love beyond the matter of my self.
When I give Bibles, I see smiles. I see joy.
When I return to that church weeks later, I see the people coming down the criss-crossed Haitian trails carrying His Word as if it were a baby.
There's a bounce in their step.
There's hope.
What more can I say to you, except that maybe you need to see it for yourself?
Live, love beyond the matter of your self.
Get out of the 4 walls and breathe.
Don't talk about all the good that should be done, but then
just fill up on the fast-food lifestyle of the 'I'm-SO-busy!'
Only let us live up to what we've already attained...
Let's start with what we know, and then actually do it, out there, in the world. 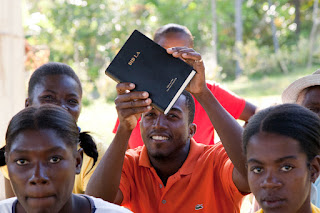