Off the Mountain and Into the Valley 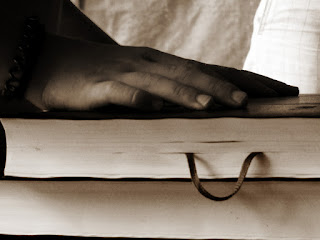 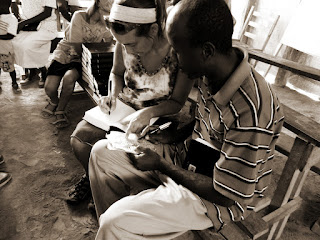 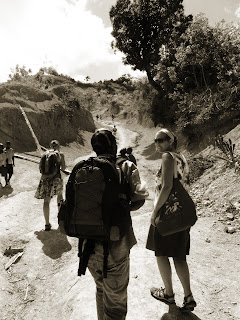 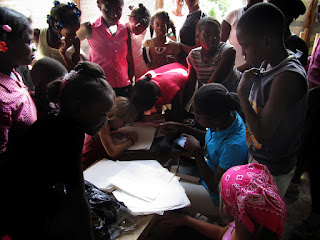 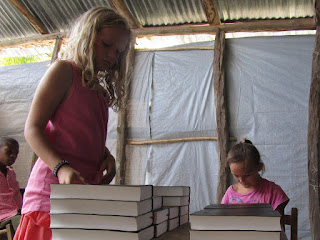 We had another Bible distribution up in the hills the other day. With all the rain we got the night before I really considered sending word up the mountain that we wouldn't be coming, but everyone was pumped and prayed up, so we decided to go for it. This time 4 Haitian kids came along with our 2 families and Chelo. 12 people in our little Toyota. They sang praise songs in Kreyol all the way up and down. At one point we were too heavy and the tires were just spinning. Everyone jumped out and I made another run at it. We made it! The roads were dry! When we'd gone as far as the car could go we split the Bibles up and back-packed them in. Another church full of people, and 34 more chances to give the Gospel, give a Bible and talk about Jesus.

We all agreed it was a beautiful day. Pretty soon the stabilizer bar is going to break all the way through, and then the car will be finished, but still we were left wishing we could spend every day that way. You know, up on the mountaintop, in that perfect place, witnessing the Glory of God, so content that you just want to stay there, maybe even fall asleep there in that balmy peace. Just like Peter, we always want to stay. But the real ministry happens down in the valley, in the day-to-day living. It's in the way people watch you when you go to the market. It's in the way you interact with your own family on the other side of the gate, when you think they can't see, but really they can because they are peeking through the cracks. It's in the real world. It's in your own sin and forgiveness, and it's in your willingness to talk about it. Jesus is there. In the dirty.


It's exactly why you can't stay on the mountain. Because if you stay there you're a fraud. If you can't get out of the baby pool and step into the valley with Jesus, why bother to follow Him at all, Christian? You do know that's where He's working, right?

Would you prefer to pick at people's clothes, knocking them down over something as silly as their attire, over their shoes or their haircut, over their attitude, over their habit? How many people do we condemn in the name of Jesus? What did you think the people in the valley would look like? How did you suppose they would dress? Did you expect they'd all be drinking fruit-smoothies and eating celery sticks for lunch? Were you not expecting the tight clothes, the rum, the drugs, the everyday vices, age-old tools of the enemy, designed to distract us, and ultimately to destroy us?

He's with the broken-hearted, the hurting, the poor, the lonely, the sad, the desperate, the Dezòds. He's fishing people out of the storm, rescuing souls from the fire, and we're concerned they might not look appropriate on their way into the furnace.

He's the Bèje mouton, the Shepherd.

He's after YOU, lost sheep! He's left the other 99 over in the green pastures and He's in hot pursuit. For you. For your love. Can you feel him at your heels?

Quit looking for Him in that soft lullaby. He's not on the mountain. He's not in the manger anymore. He's not the babe wrapped in swaddling clothes.

He's the Warrior King. He's down in that valley of the shadow of Death. He's got the scars to prove it. He's earned this. He's not afraid to go. Have you got the guts to follow into that unsafe place, into the dark, alone, with nothing but your whispered prayer to Him on your lips to give you courage for the next step?

Is that next step insane? Is it absolutely ridiculous? Is it impossible? It doesn't matter. The only important question worth asking is this: "Is my Father there?" If He is, then run to Him. Leap to Him. Throw yourself out of the boat, just like Peter did when he realized he had a second chance to come under the love of Jesus. How amazing for him to discover that he'd never actually fallen out of the love of his Maker. Jesus loved him all along. In spite of who you are, he loves you the same. Up on the mountain we bask in the Glory of Jesus, but down in the valley we realize what a Friend He is to us.

My friend Patchouko was translating for me in church as I gave the message on Sunday. While we were waiting at the altar to speak, his little boy Joshua got away from the moms. Down the middle of the aisle he came, coaxed at every chair by the next momma in line, trying to keep him from walking to the altar.

I was last in line before Patchouko. Joshua came to me. He tried to force a smile, but it wouldn't come. He couldn't take his eyes off of his Dad. I just wouldn't do. He had to come to his Dad.

In front of the church he climbed up onto the altar and into his father's arms, coming to perfect peace, finally at rest. He let out a big sigh, wrapped up in a smile.

It was a beautiful picture to me. It's where we all need to be, walking, even through the valley if we must, but with our eyes fixed on Jesus.  Not on everyone else, what they think, and whether or not they approve.  Just Jesus.
Posted by Daniel C. Elliott at 5:10 PM