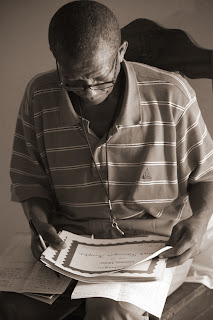 We had two pastors over today, making plans for next month and going over last month's work.  Somewhere in the middle they wanted to give me a list of the expenses they'd incurred for my friend Torrey's pastor's seminary. Torrey had already given the money and as of today he's left the country for a family emergency, but the pastors still wanted to show a line item of how that money was spent.  One pastor took out his wooden rubber stamp and an old bottle of ink.  The other put on his reading glasses. He dipped in the seal and then they both very delicately pressed the ink onto the document.  It was signed in real ink by the President, the Treasurer, the Secretary and a Delegate, all from the League of Pastors.
This country is notorious for certificates, badges, and credentials.
I am notorious for rejecting all such "rubbish" as Paul called it.  Skubala was the actual word he used for that... which is a nice way of saying it all amounted to nothing more than feces.
But I'm firmly aware of the ideals of the country in which I serve, so I took the paper and smiled.
They'd listed everything, right down to the napkins and the 4 gallons of gas for the generator.
I asked,  "Torrey's already given you the money for that project, yes?"
"Correct.  But I wanted you to see.  This is where every dollar went. ' Let your Yes be Yes, and your No be No.'" he said.   Then it made all the sense in the world.
He wasn't just handing me some receipt, and this wasn't just any signed and sealed document.  He was handing me his integrity and his reputation.
I have to respect that kind of character. 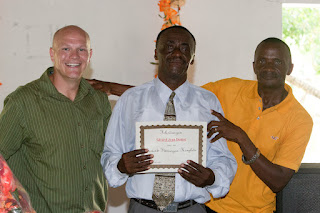