I have a friend here who is a fisherman.

I have a great deal of respect for him.
I watch him almost every morning, heading out to sea to work his trade.
He usually doesn't come back until late in the night, sometimes soaked through.
Some days he stops at my house and offers me a big fish from the ocean, and tells me stories of the great wind or the giant wave that almost became the end of him.
I always bid him a good night, glad that this man loves the water, as I certainly do not.
I grew up in Wyoming.  Wyoming, land of dry, dusty, hard-baked earth.  I've always been happy to have solid ground between my toes, and I've never been afraid of a blizzard or three.

Today he came by the house, and tomorrow, he's asked to take my family across the sea.  To an island we've always seen, in the distance, 8 miles away, the big island...in this boat.  We will have oars and a sail, and the breath of God to carry us along. 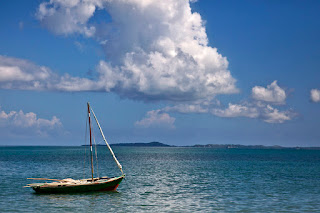 Even my Haitian brothers have both told me they will be pre-disposed, occupied, too busy, to come along, "Besides," they say, "That boat is too small for a trip like that." Still, I know we could use this.  I know it's what my family needs right now. It's something God can use, so I will not be afraid, even though Tikilene's response to the idea of going was,
"No! Huh-uh! Cyclone Dan! Cyclone!"  (Hurricane)

"That's not what I hoped to hear from you.  I hoped to hear something a little more uplifting, like, 'Courage!' or 'God knows everything!'" (popular sayings to evoke resolve here).

No matter that if we miss, it's only thousands of miles of Atlantic ocean until we come upon Africa....
No matter that I just read Acts 27:13-44, about some guys a couple of thousand years ago who set out to sail within sight of the shore on a day with a beautiful gentle breeze, and 2 stormy weeks later finally shipwrecked and came ashore on the planks and what remained of the ship.... No matter.