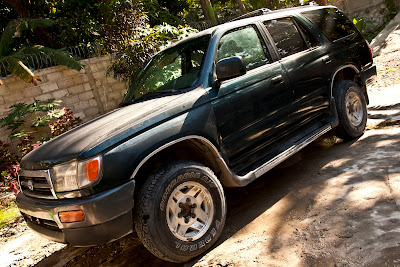 It was hard to consider buying a vehicle that I could get for half the price in the States.   Anytime I spend alot of money here, I get that sick-to-my-stomach feeling.

This one was 15 years old with around 240,000 miles, but overall it was the most decent car I've looked at in Haiti.  The owner, Edens, is a good man.  I like him, and he seems to take good care of his vehicles.
When I popped the hood, it was the cleanest and least messed-with engine I'd seen in country.  We had money saved from the sale of our home and studio, and so after some prayer and alot of talk, we decided to act.   The car was bought and the paperwork was finished at the police station in Cayes.
I had another flat tire yesterday but there's always a silver lining...

I was able to teach my son how to change a tire, and Mr. Shane Shaw taught me where in Cayes I can get a flat fixed in under 15 minutes for 20 Haitian.    In my opinion, that's a sweet deal.  I was told to expect a flat about every other week here....which translates to two things I will need to have in haiti at all times:  1. A spare tire.  2. Patience.
I drove through a gigantic mud puddle that was about 3 times the size of our car, and half as deep.  We even had mud inside the car, and the kids were yelling,
"Do it again!" from the back seat.   They changed their minds about the mud today, after they had to wash the car....twice.
I was able to pick up bibles, three cases in 1 run.  I gave the next door neighbor kid a ride to school. I was able to haul an entire back-end full of supplies for Msye Jacques and his store.  I picked up Benson and gave him a ride home from Cayes, and we even had a family outing to Shane Shaw's ranch to help him with his Tilapia project.  It was good to get everyone out of the house.
Finally, i was able to find, purchase, and bring home a stand up, oscillating fan for a little relief when there is no breeze.  We still had power when I got home, so we put it together and plugged it in.  Everyone was extremely blessed by the movement of air.
Vehicle purchase: worth it.
When Rose first told me about her dream of my family distributing bibles in Haiti, she said we all jumped in the "Cow"... you know, the Cow!  Then she held up her hands at 10 and 2, and I realized she was talking about a car, just having trouble with the pronunciation of the R....
So, we've taken a vote as a family, and we decided to name our car..........wait for it........
Bessy.
Posted by Daniel C. Elliott at 12:29 PM