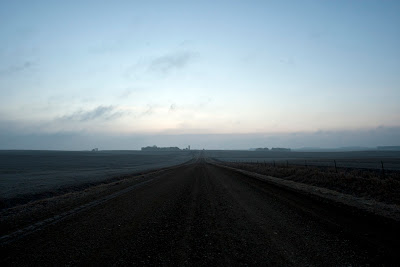 The sun rose this morning at 7:10 a.m. over this sleepy farmland.
I was going to walk to the top of the Sioux Rec Park, but it wasn't to be.
The morning was shrouded, veiled in fog and frost.
I've witnessed and photographed some of the most beautiful, spectacular sunrises in Haiti.
But this wasn't one of them...

Even when our hearts are clouded and frosted, when the world seems sleepy blue and gray,
ever adrift in the depths of the sea of forgetfulness...
It's Sunday.
Whether we see it or not, nothing holds Him back.
The Son has Risen.
He shines whether we know it or not.
It's the once and for all most beautiful Son-rise the universe has ever seen.