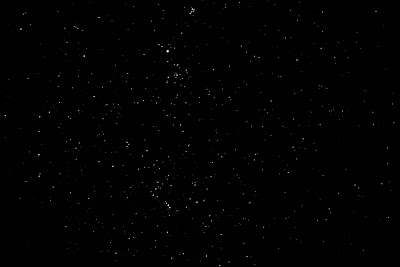 We lost power last night, and I walked up onto the roof
to watch all of the commotion and partying and shrieking
in the street.  Even with the moon as bright as it was,
the last stars of 2012 were beautiful.
I've only seen them shine like this while laying on the ground at the top of the mountains in Wyoming,
in the middle of the night and miles away
from a single artificial light.
We get the same effect here in Haiti, among a sea of millions, when the power everywhere just blinks off, and the only light is coming from the charcoal of the cooking fires.

Can you make out Orion, on his final hunt of 2012?
The dogs were on his heels, just out of sight
beyond the palm trees of a restless night in Haiti.

There is a touch of what looks like motion blur in the image, but it's actually just the movement of the earth.   The shutter stays open for about 30 seconds, just enough time to remind us that the world is, in fact, still spinning round.