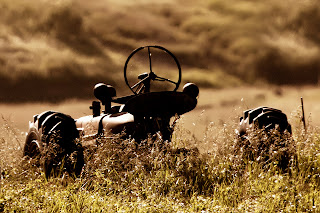 If you've ever had the pleasure to drive the backroads of rural America, you might notice the old pickups, farm implements, the beautiful curves of the cars from yesteryear, parked out in the weeds.   Once important to the everyday function of life, these dinosaurs always seem to tell me a story.   Why?

Because in some window of time, each one was treasured.  There are miles and miles recorded on each odometer.  They were travelers in their shining moments.  They went the distance.  There was a day when they were taken for a spin, kept up, cleaned, even polished.  Each one had its glory days, so-to-speak, when it mattered. 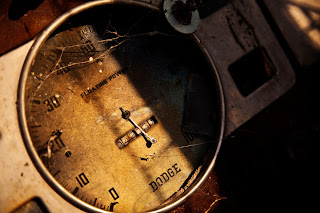 And when they were parked for the last time, there's a story there too.  That farmer knew it still had value,  thought maybe one day he'd get use out of it again, maybe sell off the parts, or the kids would grow up and want it.   And if you notice, they are never parked out front for everyone to see.  They are always stashed somewhere in that far corner of the farm, near the tree belt, what we used to call the Back 40.
Out of sight, out of mind.
The weeds come up and take over,  time and weather take their toll,  some psycho nephew grabs his 22 and uses them for target practice one day... 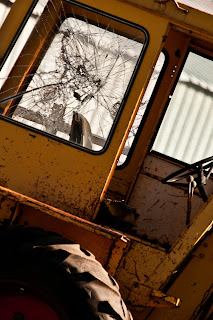 Eventually they become a nuisance.  A problem. Just something to get rid of to make the place look better.
The farmer turns the place over to the kids, or some new out-of-towner who wants the feel of 'country-livin', and then come the complaints that they make the place look like a dump.
Someone has to haul those 'eye-sores' away.
It dawned on me this morning....that's exactly what we do with the Word of God.
We take those pieces of scripture that aren't about love, aren't about grace, aren't about prosperity and riches, and we carve them out of our daily lives, don't we?
“If anyone comes to me and does not hate his father and mother, his wife and children, his brothers and sisters—yes, even his own life—he cannot be my disciple." ~Jesus, Luke 14
Ouch.  Awfully strong words. We don't say that anymore.  Hmmm.....Cut that out....
“Brother will betray brother to death, and a father his child; children will rebel against their parents and have them put to death. All men will hate you because of me, but he who stands firm to the end will be saved. " ~Jesus, Matthew 10
Park that out back for now... 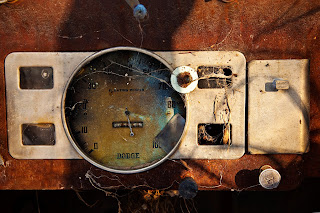 "Do not be afraid of those who kill the body but cannot kill the soul. Rather, be afraid of the One who can destroy both soul and body in hell. "
I don't feel very good reading that.  I think that's just gonna sit somewhere I don't have to look at it... 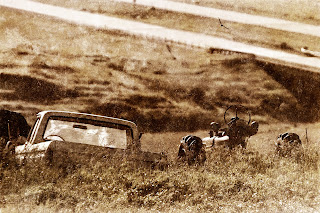 “Do not suppose that I have come to bring peace to the earth. I did not come to bring peace, but a sword. For I have come to turn “‘a man against his father, a daughter against her mother, a daughter–in–law against her mother–in–law — a man’s enemies will be the members of his own household.’
Anyone who loves his father or mother more than me is not worthy of me; anyone who loves his son or daughter more than me is not worthy of me; and anyone who does not take his cross and follow me is not worthy of me. Whoever finds his life will lose it, and whoever loses his life for my sake will find it."
Are you seeing my point?  It's about so much more than looks, isn't it?  Will it matter how manicured and pretty the front lawn is if we've got those old junkers sitting out back?  Who wants to hear them, let alone look at them?
Eventually, if we keep them parked out in the weeds and don't mention them, they are going to become useless to a world so comforted and coddled with the peace, love, joy and prosperity that we preach. 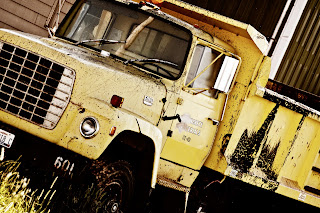 Is that the faith we want to hand down to the kids?  I mean, who knows, might be worth something someday...they might get some use out of it....
Cramming our own, personal faith into our own custom fit, we find one day that Jesus only looks good on a T-shirt, and His true message is "outdated", "primitive", "intolerable" .   His truth will no longer satisfy or give freedom, because they will no longer have ears to hear or eyes to see.  They'll just want some piece of scripture to make them feel good.
Reducing the bible down to some sort of self-help manual, the power and the message of what He did and why are lost.   One day, it will be considered best to just take all those bibles and haul them out of here.   It will seem to make the place more fresh if we just haul those eyes-sores away. 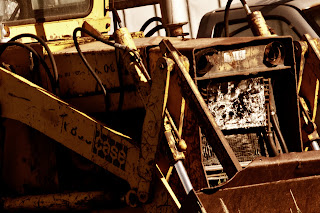 I always tell my kids to grab their ears and give them a good wiggle.  Soon as they do, I read this old junker of a verse...  This old, outdated clunker that is really a treasure given the proper measure of attention and respect that it deserves....this piece of history that tells a story, a whole story, meant for all to hear...
"He who has ears, let him hear."
Posted by Daniel C. Elliott at 8:24 AM