The Haitian and the False Teacher 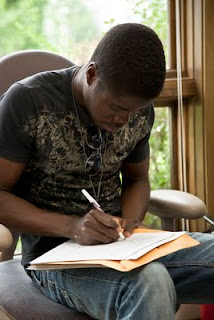 It's a beautiful morning, gonna be hot today. Already hot in my house :)
We've got our Haitian brother, Andi, back living with us. He's doing good, seems to be in good spirits.
This morning during our bible study he mentioned something that really concerned me, and it's not right to let it go.
I don't know if you know, but we've gone through a few books of the bible with Andi, and right now we happen to be in Matthew 14, where Jesus feeds the 5000+ and walks on water.
Andi told me that while he was away from us, a man spent one day from 11 am to 7pm one day talking to him about his own personal denomination and why it's 'better'. Then came the part that needs to be addressed.
Andi said that this man told him that there were no actual miracles in the bible.
The examples he used were these three:
1. When Jesus spat in the dirt, made mud, and put it on the blind man's eyes - the man said that it wasn't Jesus healing him, but that the dirt and mud did something.
2. When Jesus fed the 5000, (The scripture we're currently studying) - the man said it wasn't a miracle, just an example of sharing.
3. When Jesus walked on water (also scripture we're currently studying) - the man said he didn't really walk on the water, he was walking along the sand.

I'm sorry, but this doesn't fly with me, and it shouldn't fly with any Christian. If you choose to discount the miracles of Christ, you're telling me one of two things, either Jesus and the Word of God is filled with lies, or this individual is a liar. In Matthew 9:5, Jesus dealt with a very similar issue, teachers of the law calling Him a blasphemer because he healed a man.

"Which is easier: to say, 'Your sins are forgiven', or to say, 'Get up and walk'? But so that you may know that the Son of Man has authority on earth to forgive sins..." Then he said to the paralytic, "Get up, take your mat and go home."

Christ did the harder thing first, forgiving the man of his sins. Then he proved his authority, by healing that same man, doing the easier thing second. Anyone spreading the false teaching that Jesus did not perform miracles is in essence saying that He has no authority. I'd list every miracle in the bible if it were necessary, but I assume there is no need. If any of you can do something so simple as to turn your glass of water into wine, I'll shut up.....actually, no I wouldn't.

I hold Jesus Christ at his word, and the Bible as the inspired Word of God. Truth.
I therefore hold anyone who preaches that there were no miracles to be a great teacher of the law, a liar, and flat out. That person needs discipleship and correction, and that teaching needs to be rebuked.

As it is, we spent the morning sending those lies exactly to the place they belong, which is straight to Hell. Andi Gedna knows 'better', because he has the truth given to him by the Holy Spirit.
Posted by Daniel C. Elliott at 8:30 AM